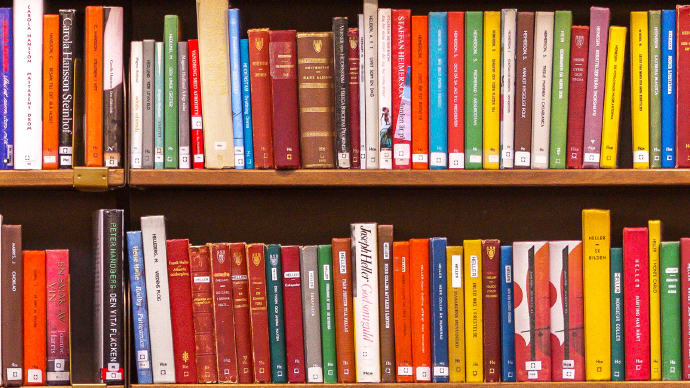 Apparently, Las Vegas readers love a good thriller, judging by the local library district's list of most checked-out books of 2019.

According to the Las Vegas-Clark County Library District's list of books borrowed by children, teens and adults, thrillers and graphic novels were quite popular, which has been the case for the past few years, said Rebecca Colbert, who heads the district’s Collection and Bibliographic Services.

Mo Willems, Rick Riordan and James Patterson all authored books that appeared multiple times on the top-10 lists. Having the same author appear frequently is not unusual, Colbert said.

“Readers tend to be loyal to the authors they love,” she said. “If you look at data for the last 10 years, for example, the Harry Potter series dominates the juvenile fiction list.”

Colbert added that books by Patterson, who is mostly known for his thrillers and suspense novels, has been popular for decades, and that the district often has to order nearly 100 copies of every new Patterson book that’s released.

One book that was a surprising hit, she said, was “Where the Crawdads Sing,” by Delia Owens. The novel, which came out in 2018, topped the The New York Times Fiction Best Sellers of 2019 for 27 non-consecutive weeks.

“We only had a few copies ordered initially and then word of mouth kept growing and more people wanted to read it,” she said. “We ordered more copies on a half-dozen occasions to meet the demand.”

Colbert said books that are adapted into movies tend to result in an uptick of popularity. As was the case last year with “To All the Boys I’ve Loved Before,” by Jenny Han. Other popular books that have recently been adapted into movies include “The Maze Runner,” by James Dashner, “The Hunger Games,” by Suzanne Collins and “I, Robot,” by Isaac Asimov.

Teens checked out books pertaining to all ranges of gender, age and ethnicity.

“Many adults read young adult fiction and the strength of the list surprised me,” she said. “Clearly, writing for teens is where authors can take risks and find an audience. It gives me hope that the teens reading these titles will grow into adults who seek out different authors and genres, too.”

The library offers a wide variety of items outside print books available for checkout, including DVDs, hotspots, iPads and even museum passes. Last year, the district reached a milestone in e-book circulation with 2 million checkouts.

“Customers come seeking items that will enrich and improve their lives,” she said. “I am happy they stop to take home books as well.”

“Are You Ready to Play Outside?” (Mo Willems)

“The Thank You Book”  (Mo Willems)

“Diary of a Wimpy Kid: The Meltdown” (Jeff Kinney)

“To All the Boys I’ve Loved Before” (Jenny Han)

“The Sea of Monsters”  (Rick Riordan)

“The House Next Door” (James Patterson)

“The Cornwalls Are Gone”  (James Patterson)